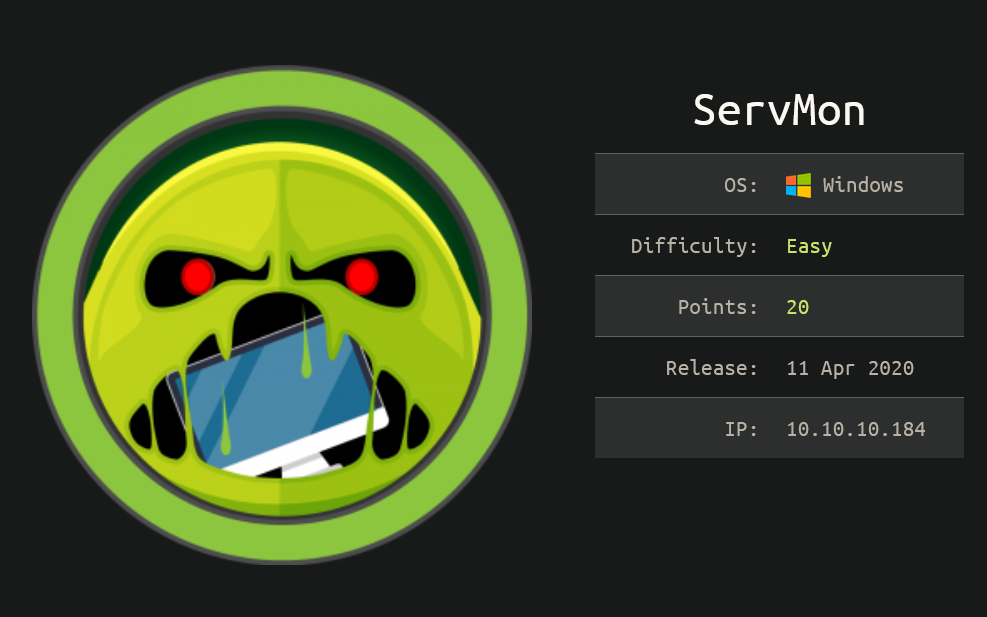 ServMon was an easy rated Windows box that took me longer to solve than I expected given the rating. Sensitive files stored on an anonymous FTP server, a directory traversal vulnerability in a web server and some password spraying were used to gain a low privilege shell. From there, the admin password for NSClient++ was found stored in plain text and port forwarding was used to access the NSClient++ web server. These admin privileges were abused to upload and run a reverse shell script resulting in a system shell. I added servmon.htb to my /etc/hosts and got to work.

NVMS eh? Let's see if searchsploit has anything on it:

Let's try it out:

Well, that worked. The problem with LFI is that you need to know specific filenames since you can't browse directories so I put that on the backburner for now.

Without any creds, I checked FTP to see if anonymous access was enabled. It was and I downloaded a juicy looking file from Nadine's home directory:

I found another text file in Nathan's directory and grabbed that too:

Now that we have a file name and location to check out courtesy of Nadine, it's time to use that directory traversal vulnerability from earlier:

I saved the potential passwords to 'passwords.txt' and created a 'users.txt' with Nadine and Nathan's names inside. Time to spray with crackmapexec:

Let's just verify it works with SMB as I could not list shares with a null session before:

I tried the password on SSH and got in:

While enumerating the system, I saw that NSClient++ was installed, matching the nmap results:

Let's see what the text says:

Let's see if that holds true for us:

I got bonged at the door:

NSClient++ was originally made as an agent for Nagios, which I am pretty familiar with so I thought I had it made.

NSClient++ has the ability to run external scripts but its GUI was so vastly different than what I had seen in Nagios that I simply could not get it to work. I failed for hours trying various things before finally taking a breather and looking at some api docs. I tried to list the external scripts installed:

Encouraged by that, I tried running a script:

Sweet, that worked! Time to create a reverse shell script using nc.exe that I uploaded to c:\temp:

Now to upload it:

OCD required me to make sure it was there:

I probably could have run the script with curl like I did the other one but I was so annoyed at the GUI I had to show it who's boss. I found my script under 'Queries':

With a netcat listener, I caught a shell as system: